Explore methods and tools for assessing your research impact, including citation tracking and altmetrics.

For more information or to schedule an individual or group consultation, contact the THL Research Impact Core.

Michigan Experts is a searchable database of research expertise across the University of Michigan, developed by the Medical School Office of Research and custom-tailored for our research community to foster collaboration on campus and around the world.

Questions about these indicators? Contact us using the information in the "Library Contact" box underneath the left-hand navigation. 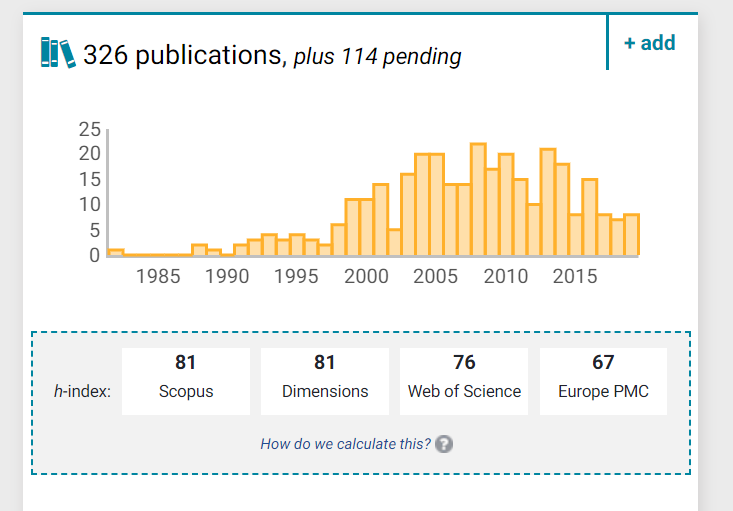 The h-index is a popular measure of publishing impact, where an author's h-index is represented by the number of papers (h) with a citation number ≥ h. For example, a scientist with an h-index of 14 has published numerous papers, 14 of which have been cited at least 14 times.

Where To Find H-Index

The h-index is available to view in an author's individual profile in Elements, the back-end of Michigan Experts, and can also show up in the Reporting tools.

"The Field Citation Ratio (FCR) is a citation-based measure of scientific influence of one or more articles. It is calculated by dividing the number of citations a paper has received by the average number received by documents published in the same year and in the same Fields of Research (FoR) category. The FCR is calculated for all publications in Dimensions which are at least 2 years old and were published in 2000 or later. Values are centered around 1.0 so that a publication with an FCR of 1.0 has received exactly the same number of citations as the average, while a paper with an FCR of 2.0 has received twice as many citations as the average for the Fields of Research code(s)." - Dimensions Definition

This metric accounts for the different citation patterns in the different fields, which means that it is field normalized; it can provide insight for citation rates of a publication across fields.

Where To Find FCR

This indicator will be visible within the details of a publication on the Michigan Experts platform, if it has received any citations and was published more than 2 years ago. It will be noted next to the "Dimensions Badge."

"Source Normalized Impact per Paper (SNIP) is a sophisticated metric that intrinsically accounts for field-specific differences in citation practices. It does so by comparing each journal’s citations per publication with the citation potential of its field, defined as the set of publications citing that journal. SNIP therefore measures contextual citation impact and enables direct comparison of journals in different subject fields, since the value of a single citation is greater for journals in fields where citations are less likely, and vice versa." - Measuring a Journal's Impact, Elsevier

Where To Find SNIP

If you have access to Group Statistics in Elements, which is the back-end of Michigan Experts, you will come across this indicator when viewing the list of journals published in by your selected group.

"SCImago Journal Rank (SJR) is based on the concept of a transfer of prestige between journals via their citation links. Drawing on a similar approach to the Google PageRank algorithm - which assumes that important websites are linked to from other important websites - SJR weights each incoming citation to a journal by the SJR of the citing journal, with a citation from a high-SJR source counting for more than a citation from a low-SJR source." - Measuring a Journal's Impact, Elsevier

Where To Find SJR

If you have access to Group Statistics in Elements, which is the back-end of Michigan Experts, you will come across this indicator when viewing the list of journals published in by your selected group.