Hours
The most current hours can be found on the Duderstadt Center's webpage.

About
The James and Anne Duderstadt Center (often referred to as "the Dude") was built in 1996. It was originally known as the Media Union until it was renamed in 2003 after James Duderstadt, former President of the University of Michigan, and his wife. The Dude is host to a variety of resources, including the Art, Architecture and Engineering Library, CAEN Hotline, Video & Audio studios, and GroundWorks Media Lab, among others. Mujo, the coffee shop, is also a popular destination for students, and the Dude is directly connected to the Chrysler Center and Pierpont Commons. 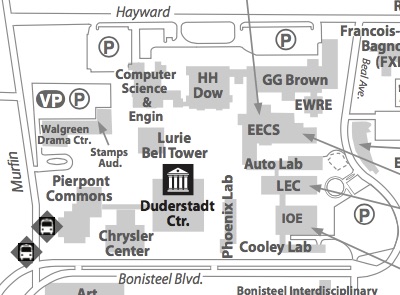