Information about using the Islamic Manuscripts Collection held at the University of Michigan Library.

Looking for "Islamic Manuscripts at Michigan" ? 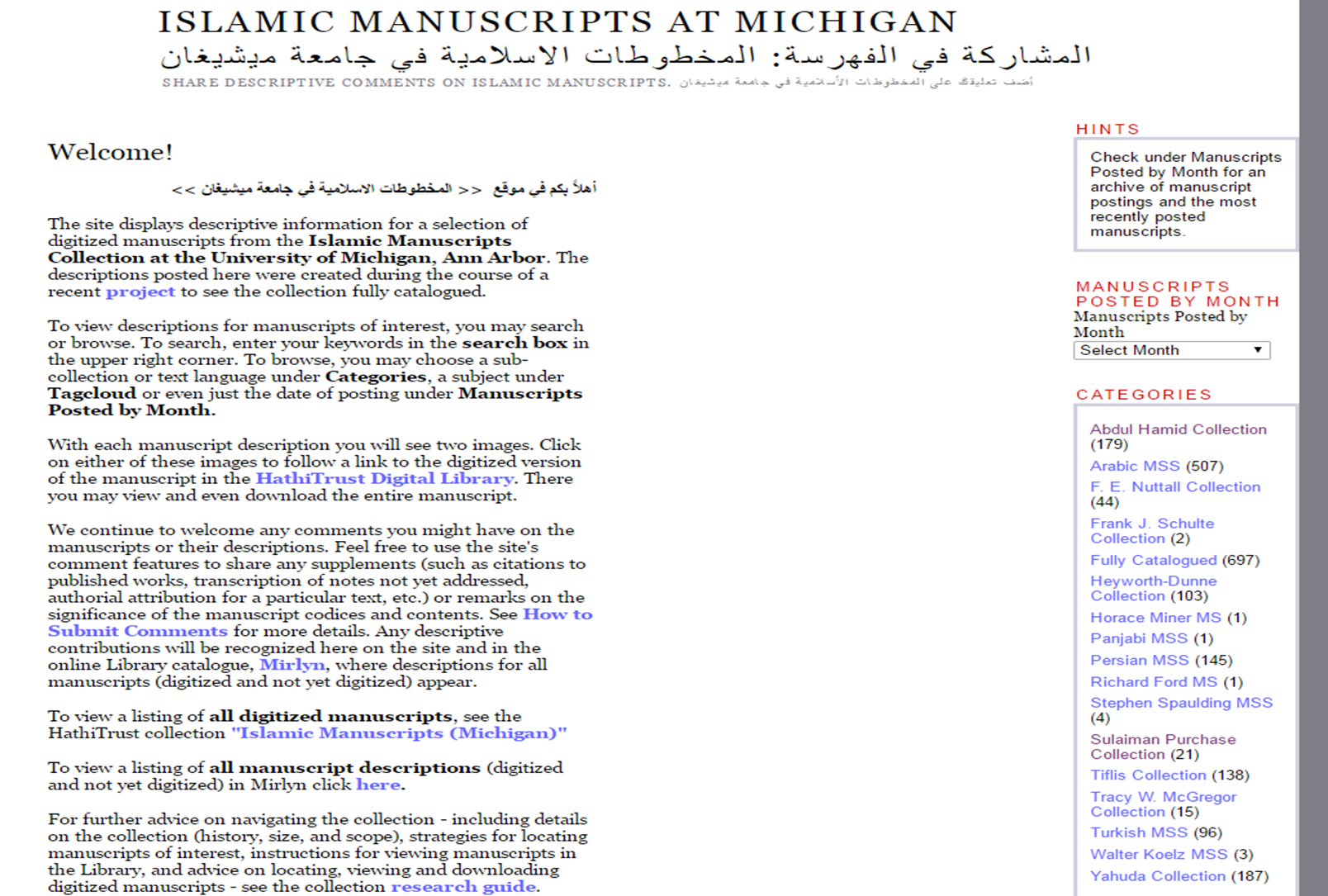 Looking for Islamic Manuscripts at Michigan? Browse our catalogue!

The Islamic Manuscripts at Michigan project site which invited commentary on a selection of manuscript descriptions has now been archived.

You can find descriptions for all manuscripts from the collection, digitized and not digitized, in our library's online catalogue.

Browse the entire collection, or search on terms of interest. Just choose Location: Special Collections and Collection: Islamic Manuscripts from the drop-down menus under Narrow Search To on the Catalog Advanced Search page.

Look for the Available Online or Full text links in your search results to view the digitized manuscripts in the HathiTrust Digital Library.

Browse this guide for more search advice, or contact the curator! 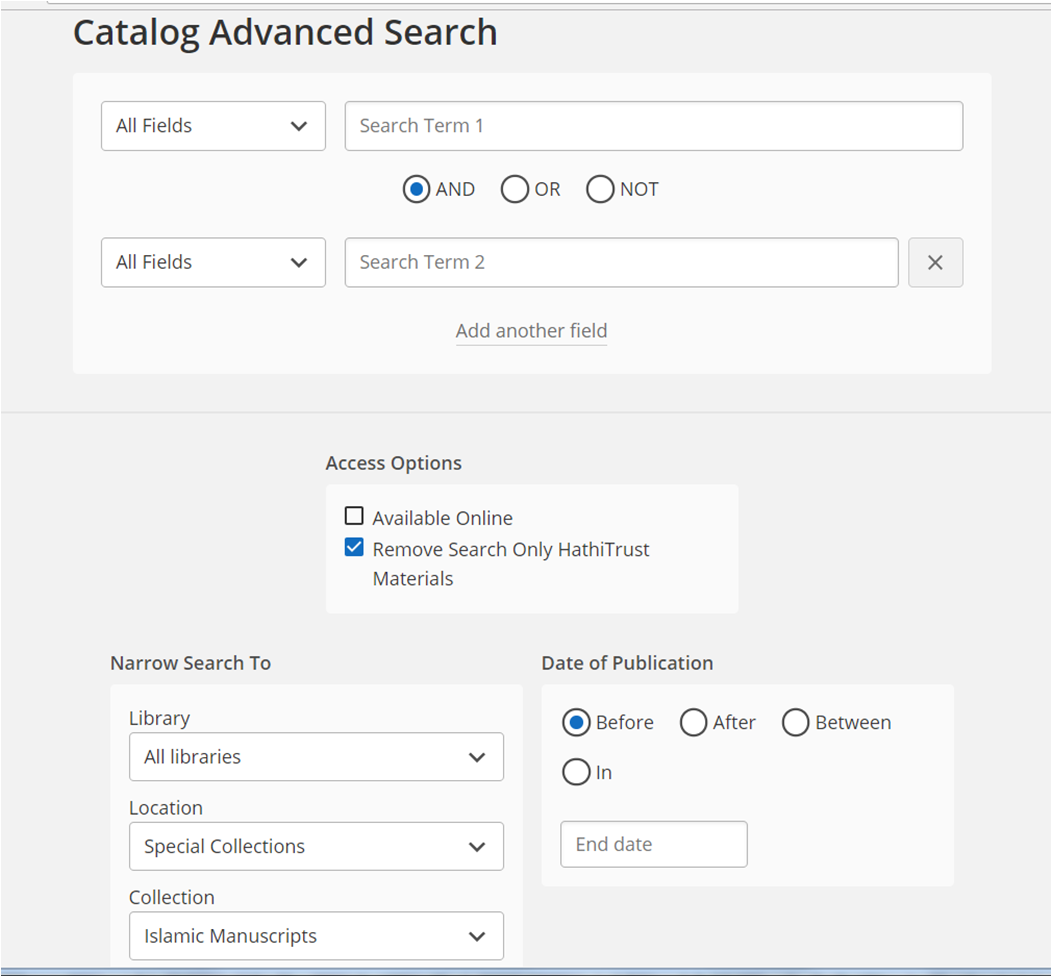 In the Library's online catalogue

Descriptions for all manuscripts of the Islamic Manuscripts Collection appear in the Library's online catalogue.

To search just the manuscripts, use Advanced Search and choose Special Collections under the Location drop down menu and then Islamic Manuscripts under the Collection drop down menu. You can then enter your search terms. Use quotation marks to search phrases (for example "framed binding") and shelfmarks (for example "isl ms 153"). Select title, author, subject etc from the dropdown menus or limit by language for a more refined search. Use AND or OR to narrow or expand your search. You can also refine your search by selecting from the "filters" in the list of search results.

To view an entire description from search results, click on the title to display the record, then click "Show all..." (for example "Show all 13 Notes") under the different sections to display all notes, contributors, other titles, references, subjects, contents, etc. Most of the physical and historical details appear under the Notes section.

In the HathiTrust Digital Library 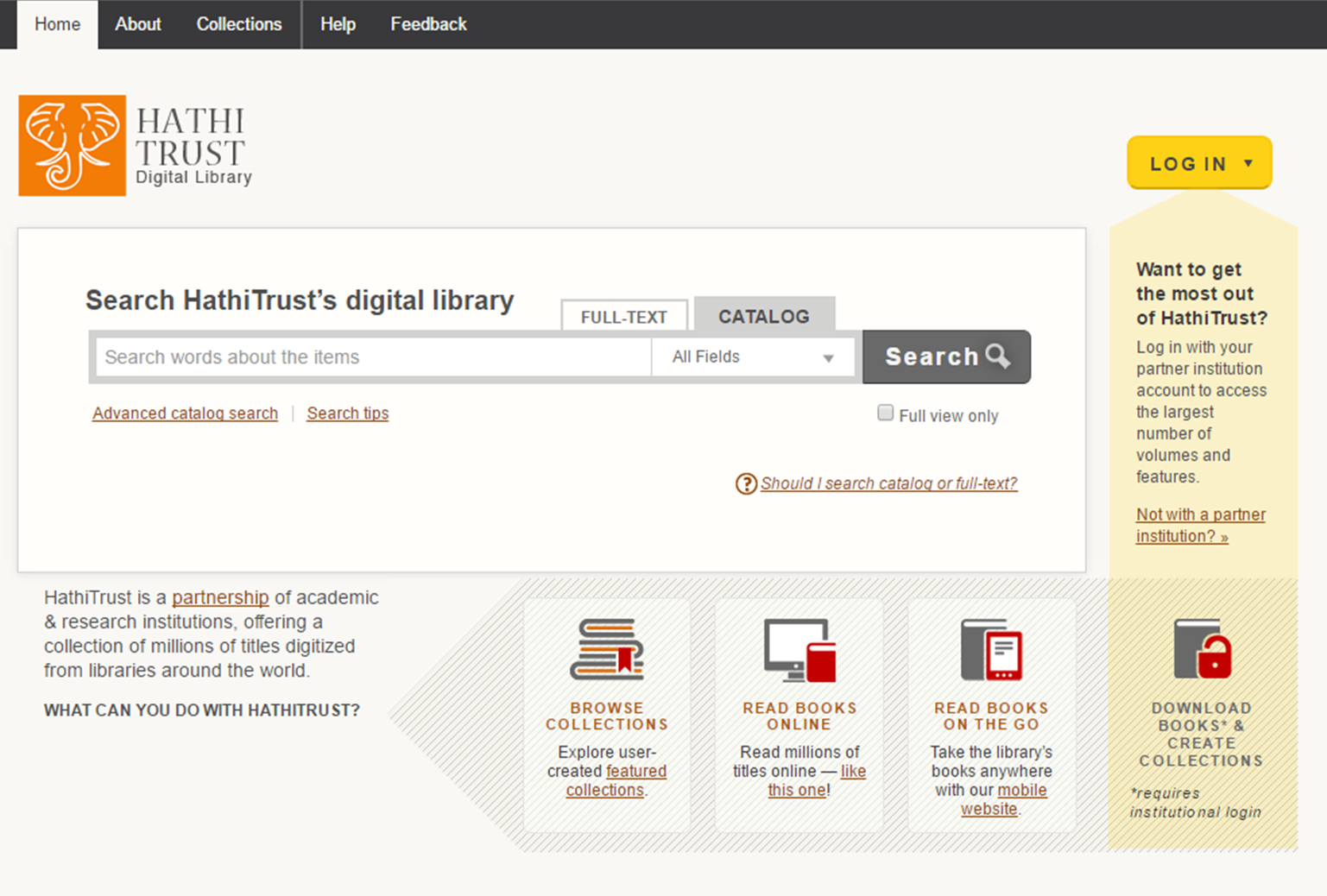 Manuscripts which have been digitized appear in the catalogue of the HathiTrust Digital Library, which you may search by keyword, author, title, and subject.

For more manageable results, use Advanced Catalog Search, which will allow you to limit your search by format ("Manuscript"), language, etc.

Keep in mind that only digitized manuscripts will appear in your results.

For more information see How do I find digitized manuscripts?

To the extent possible, any details transcribed from the manuscript are provided in the original script, mainly Arabic script (modified or not according to language). Most transcriptions of titles, incipits, explicits, etc. in Persian incorporate the proper characters ک and ی from the Persian keyboard rather than ك and ى from the Arabic keyboard. Transcriptions in Ottoman utilize the Arabic keyboard. Keep in mind that you may need to attempt your searches using both the Arabic and Persian keyboards.

Transliteration / Romanization follows the scheme outlined by the Library of Congress in their Romanization Tables for Arabic, Persian and Ottoman Turkish. Ottoman Turkish presents a special case in that the principal of conversion is followed, i.e. romanized names and titles are converted to modern Turkish orthography.

To locate a manuscript by its shelfmark (or call number), simply enter a keyword search with the shelfmark in quotes (e.g. "Isl. Ms. 570").

Use keyword or field searches to search by author, title or subject.

Keyword searches using quotation marks and truncation (where possible) will allow you to get at a range of manuscript features. You can then sort the examples retrieved by date, provenance, etc. A few examples follow:

Keep in mind that at this stage not all of the manuscripts have been catalogued to the same level of detail, so some manuscripts from the Abdul Hamid Collection and most of the McGregor Collection manuscripts will be excluded from a search addressing codicological features, transcriptions in Arabic script, or manuscript notes.

Arabic script can also be used to search for transcriptions of the opening (incipit) and close (explicit) of a text, or of keywords, names or titles appearing in colophons and manuscript notes.

In fact, searching our catalogue for transcriptions such as incipits and explicits may help you identify a manuscript, e.g. should you have an unidentified manuscript text that begins "الحمد لله الذى شرح صدر الشريعة الغراء", a search in our catalogue will retrieve two results suggesting that you have a copy of Dhakhīrat al-ʻuqbá

The descriptive scheme used in the catalogue follows a modified form of the AMREMM content standard [1], developed by the project cataloguer (Evyn Kropf) following the detailed approach outlined by Adam Gacek in Appendix V. of his Vademecum [2]. Terminology employed is also informed by:

A few of these descriptive elements may seem ambiguous or involve unfamiliar specialized terminology. See the following list for clarification:

other title(s) (with sources): Refers to the various titles that might appear both within a manuscript and in standard reference works. Varying titles within the manuscript could be found on the endpapers, on the 'title page', in the preface, in the colophon, in quire signatures, on the spine, on the tail edge of the textblock, etc.

incipit: Refers to the opening words of the text, the choice of which may allude to the subject matter of the composition, and in Islamic manuscripts most often beginning with the بسملة, followed by the حمدلة or تسبيح. In this scheme, refers to a transcription of the words following the بسملة.

explicit: Refers to the final words of the composition proper. In this scheme, refers to a transcription of these final words just before the opening of a colophon. Also known as desinit.

colophon: Refers to the final words at the end of the transcribed text - occasionally set off in form, size, script or even language from the main text - that address the circumstances of composition or production of the copy. A manuscript may have no colophon or multiple colophons (e.g., one for each volume in a multi-volume work or each corresponding to one of several works appearing in a single codex). In this scheme, if a colophon is present a transcription will be provided along with a statement identifying it as authorial or scribal and its form / shape.

dedication: Refers to a statement in the manuscript regarding for whom the text was composed, particularly if it was commissioned by and written for a patron. In this scheme, a dedication note will address person to whom the text is dedicated and the nature of the statement.

layout: Refers to the arrangement of various elements on the page (mise-en-page), as well as number of lines per page and the presence of rulings and/or prickings.

support: Refers to the writing material (namely papyrus, parchment or paper), its nature and state of preservation. In the case of paper, this scheme addresses whether European or non (Arab, Persian, Indian, etc.), laid or wove with orientation and measurement of the laid and chain lines, description of any watermarks, and characterization of the surface and furnish. Obviously much of this cannot be assessed via the digitized manuscript but must be supplied through an examination of the physical codex.

origin: Refers to where, when, and by whom the manuscript was produced. In this scheme, the copyist, date of copying, place of copying, mode of copying, and destination (if copied for someone) are addressed to the extent possible, referencing where in the volume this information appears if explicitly stated. Date and place of composition are also relevant.